I am pretty bummed that my weeklong vacation is over, but my husband aptly pointed out this morning that I have another week off in just seven weeks, during which we are heading to NYC for a few days! It was an excellent reminder and is sure to help me get through March, which for a teacher is the longest month ever. Usually, there are no days off in March; however, this year Good Friday is in March which means we will actually have a day off this month which hardly ever happens!

The one thing I appreciate most about vacation (and weekends too) besides just the time off is that I can mix up my eats. I can consume breakfasts that actually take time to prepare and lunches that are more complicated than a typical wrap. Today, I am showcasing my eats from Saturday, which was a great day for food all around. Rather than keep you waiting, let’s jump right in. Thanks Jenn for hosting this wonderful event!

I love healthy toaster waffles but haven’t eaten them in so long! This box of gluten-free, vegan quinoa and amaranth waffles has been hanging out in my freezer for all too long, but my intense craving for waffles finally got the best of me and I dug the box out.  I toasted them up for a few minutes and topped them with coconut earth balance and maple syrup.  I have to say, the waffles were awesome!  Seriously, the texture was perfect and you would never know they were gluten-free or vegan.  I felt like I was eating cake for breakfast, which is not a bad way to start the day.  I also had a sliced banana with sunflower seed butter on the side.  What a delish meal! 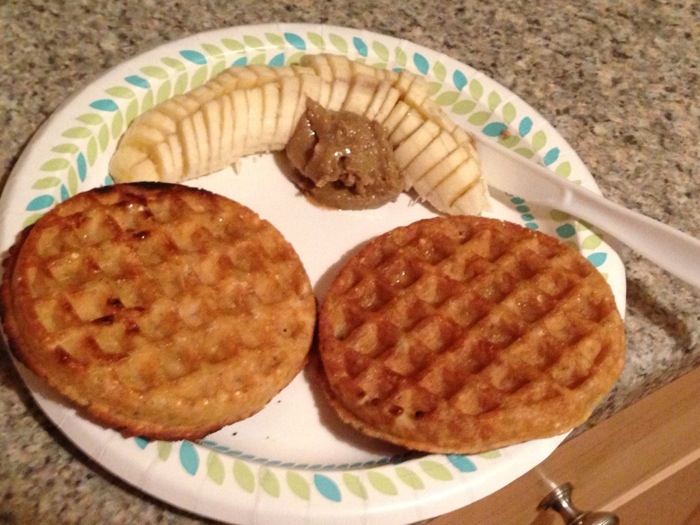 The stars of my lunch were all sorts of pickles.  I cracked open this jar of raw pickled veggies I ordered recently. . . 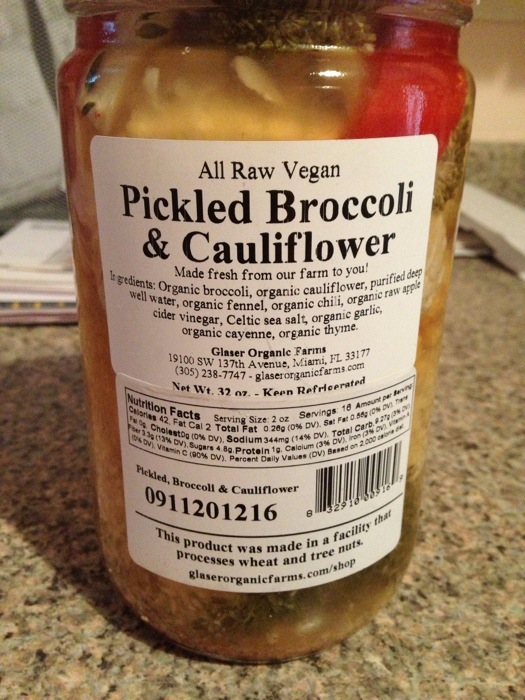 as well as this jar of raw dill pickles I picked up at Whole Foods. 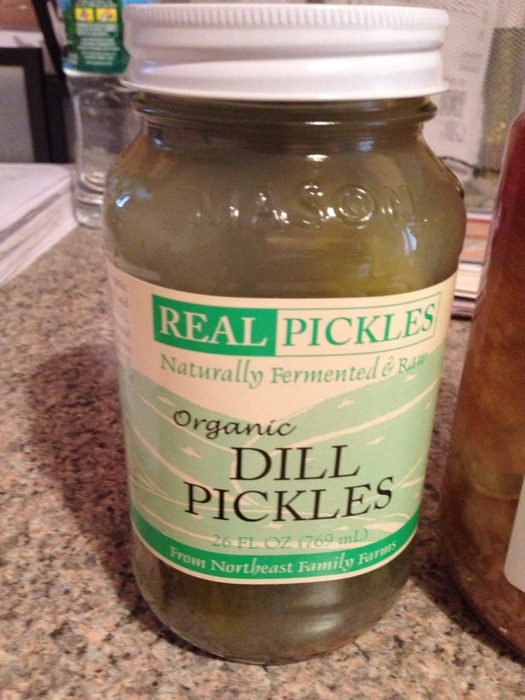 This was the ultimate mostly raw lunch tasting plate.  I had sautéed spinach and steamed asparagus, which were the only two cooked components on the plate.  I had an organic carrot topped with raw tahini herb dressing.  Also on the plate were two raw chickpea croquettes, Dr. Cow dulse nut cheese, raw rosemary crackers, raw veggie chips, and of course the raw picked veggies! 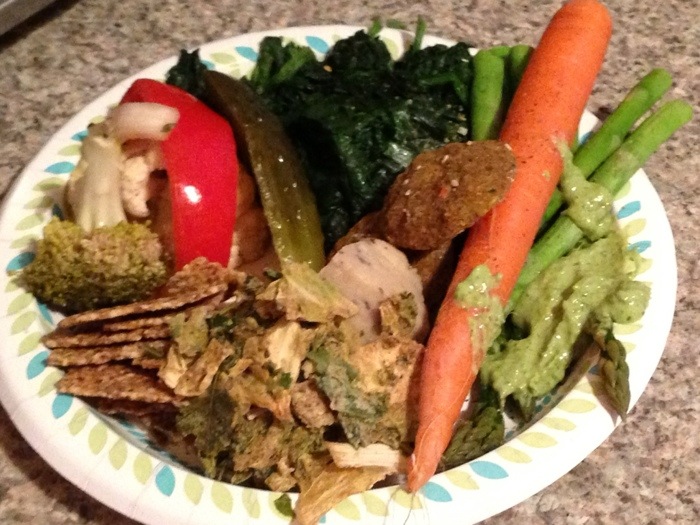 Check out those pickled veggies– they were amazingly tasty and kind of addictive! 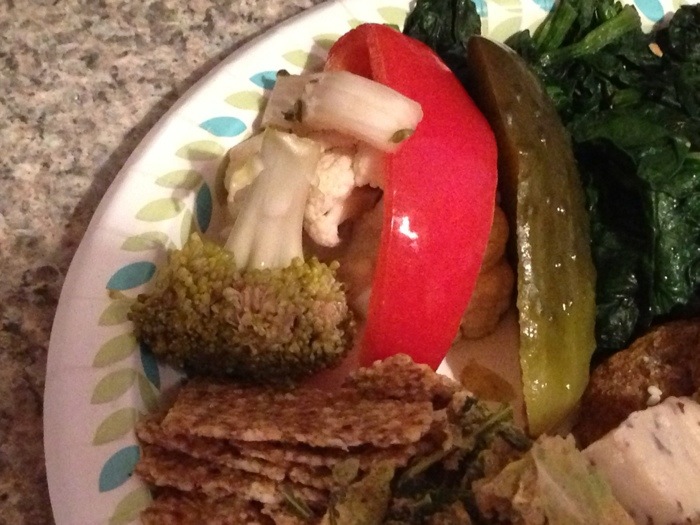 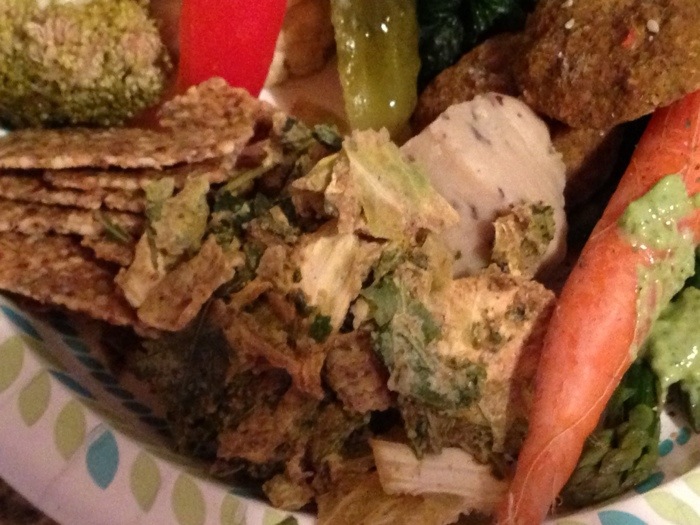 Lunch dessert was some mango, pom seeds and another new and delicious find– dried goldenberries.  I was a bit concerned I wouldn’t love goldenberries, but I was wrong.  They are perfectly sweet and tangy and with a lovely chew. 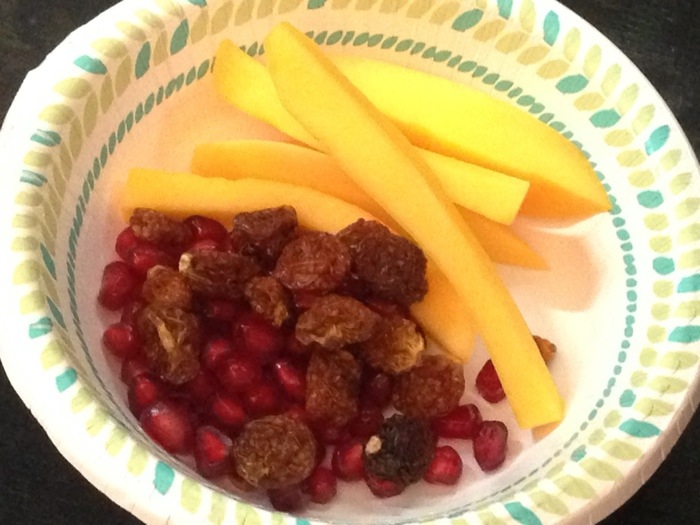 Normally I have a snack in the afternoon, but since our dinner plans were on the early side, I skipped the snack so I would be hungry for dinner at Taste of India, one of my favorite restaurants in Providence.  We started with some lentil and rice crackers (pappadum) and a trio of tangy chutneys. 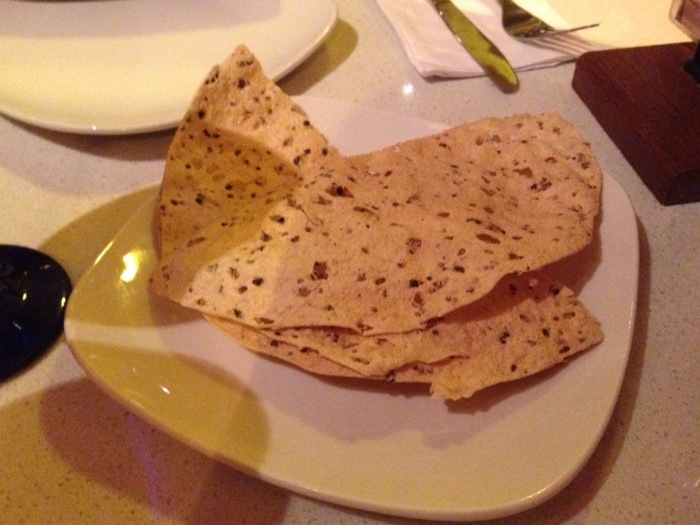 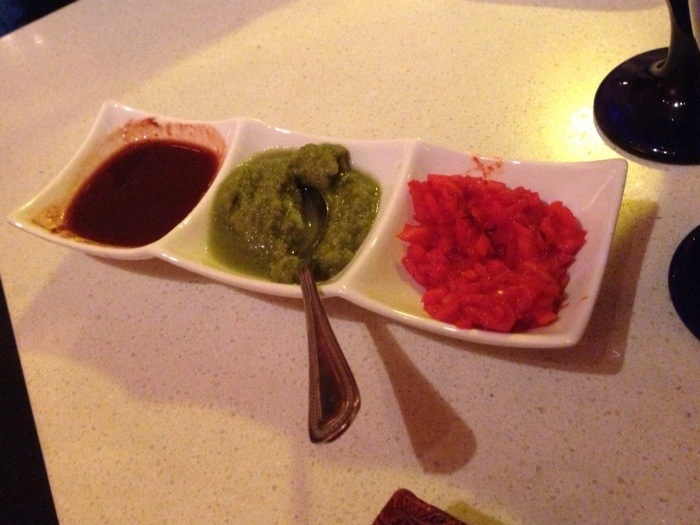 For apps, my husband and I split this huge portion of papri chaat (think nachos, but Indian-i-fied). . . 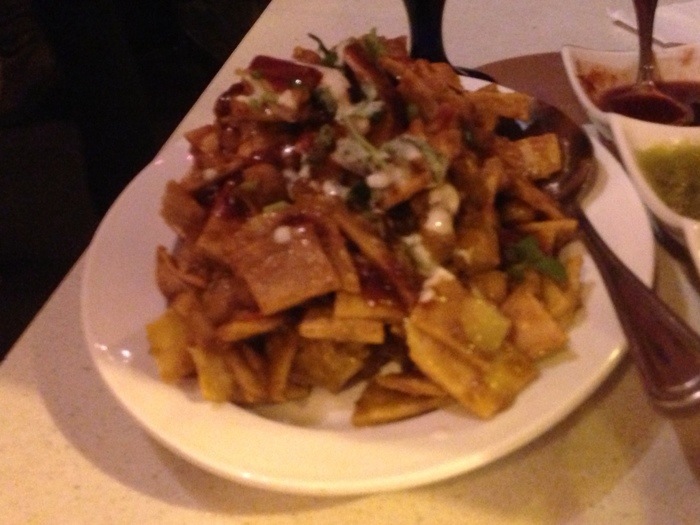 as well as this order of vegetable samosas. 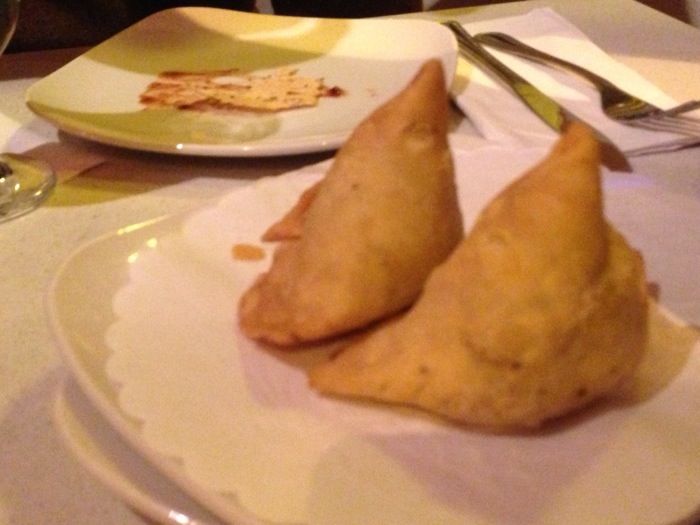 For dinner, I had a few pieces of this garlic naan (yes, this my one gluten and dairy-ful meal of the week!).  It was so fluffy and buttery! 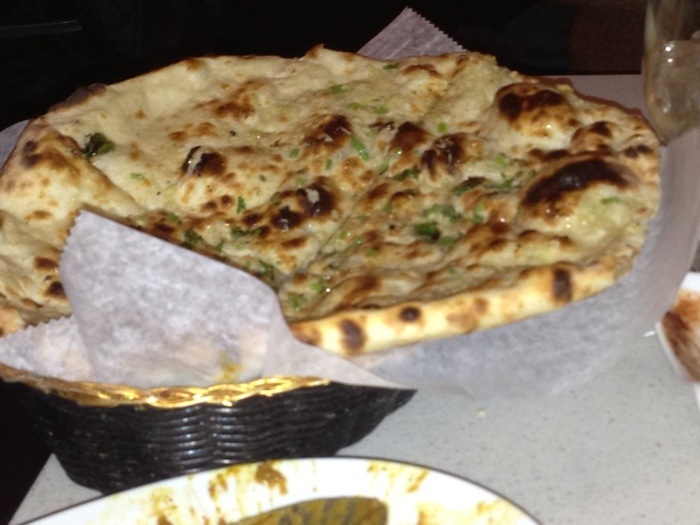 Please forgive the size of the next few pics– I was having trouble with them!  Anyway, my main entree consisted of this paneer tikka masala, which is basically Indian cheese cubes in a spicy tomato sauce. 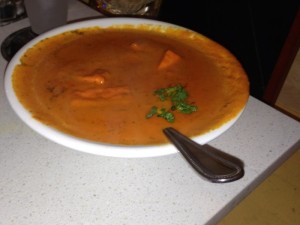 I soaked up the delicious sauce with rice! 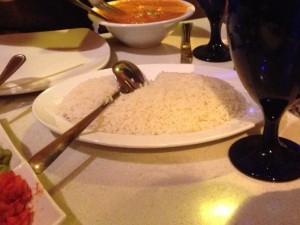 The owner of Taste of India is such a great guy– whenever he sees my husband and I, he sends us over something on the house.  This time around, we brought us some amazing kheer, or rice pudding.  You better believe I dominated it! 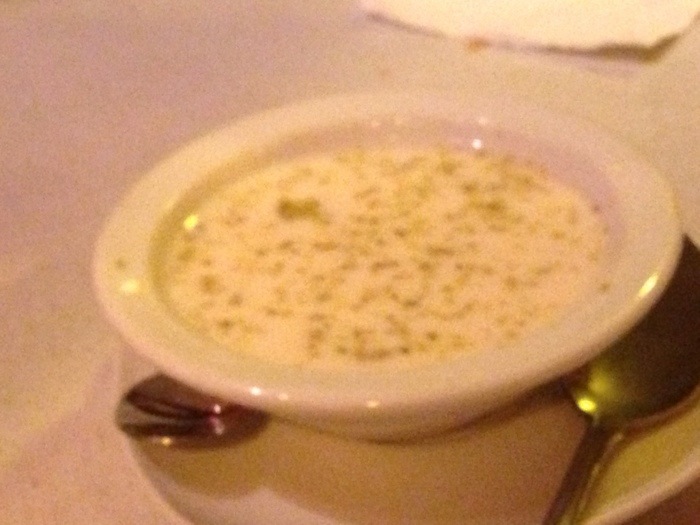 Now, dinner was on the early side, and afterwards my husband and I went out to a party for a few hours.  When we got home, I was ready for dessert number two.  I fixed myself up a nice bowl of vegan lemon poppy seed cake, soy ice cream, dark chocolate almond bark and a few pieces of vegan brittle.  Mind you, I ran 16 miles on Saturday, so it was no wonder I was hungry for this much dessert! 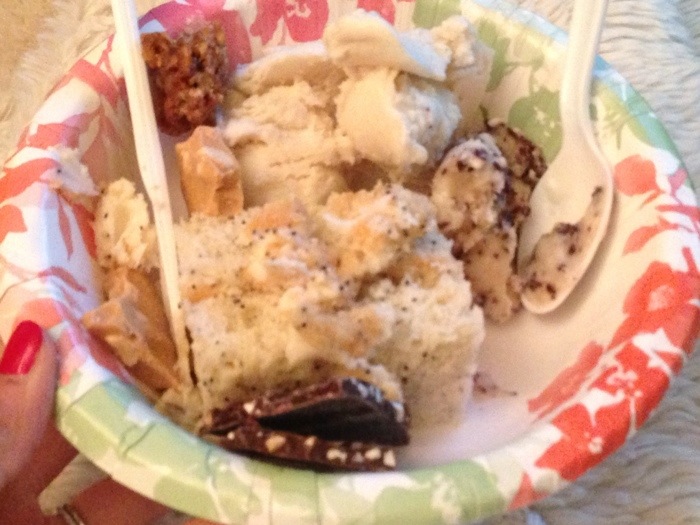 What was the best thing you ate over the weekend?  What was the last decadent dessert you ate?

2 Responses to "What I Ate Wednesday: A Typical Saturday"