I officially began phase one of my elimination diet on Sunday. Basically, the first phase consists of a ten day period in which I only eat foods on an “approved food” list, which consists of foods I reacted the least to. You have to eat only from the list– if it is not in the list, you don’t eat it. The goal of this phase is to heal by avoiding all foods that may be causing damage.

Here’s the printout which shows the foods I can eat. I can eat from both the phase 1 and phase 2 columns, as I am combining the two phases into one long ten day phase. I am also allowed onion, buckwheat and apples from the phase 3 list since I did react lowly to those foods too. 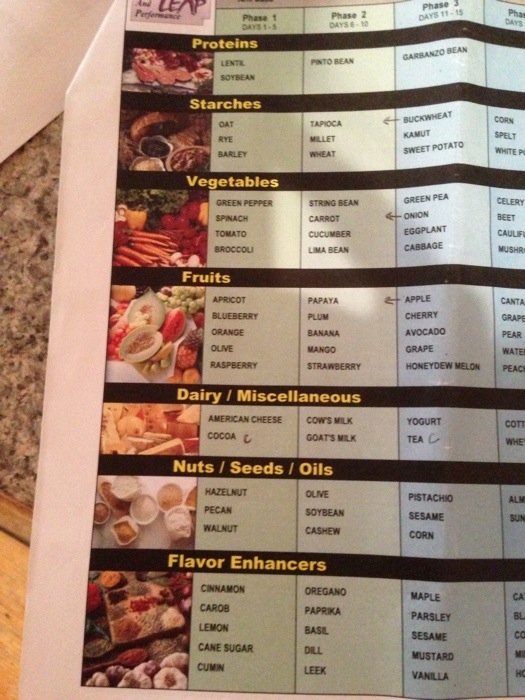 So, basically, I can only eat from a list of 47 different foods and spices. That, my friends, is not easy. However, I am confident I can do it with a lot of planning. On Saturday and Sunday, I did some official meal planning for the first time ever! I mapped out exactly what I would eat for the week, and as you can imagine, there’s a lot of repetition.

Snack will consist of:
a handful of raw cashews or pecans or walnuts and/or dried approved fruits

Dinner will consist of:
steamed broccoli, carrots, and string beans, millet, and a homemade pinto bean stew (recipe to come); an apple for dessert

If I can come up with more inventive ways to eat the approved foods, I will certainly do so, but the above meal plan seems pretty satisfying to me. As I go through phase one, I have to record how I feel after each meal or snack. Since I am done with school this week, that shouldn’t be too much of a hassle.

I do know there will be two times this week where I may have to “cheat,” though I will do my best to avoid reactive foods. On Thursday, I am going out to dinner with friends to celebrate the end of the school year, and on Saturday, my husband and I will be celebrating our wedding anniversary at the restaurant in the hotel in which we got married. I know it is important to stick to the plan as much as possible, and I plan on it, but I won’t avoid eating on those two occasions when I don’t have control over every aspect of my food. I might just do the 10 day phase one diet a little longer to make up for it.

Of course, I will let you know how I feel over these next ten days– hopefully, cutting out the foods I react most to will ease some of my recent joint and digestive issues.

Have you ever been on a strict diet? How did you manage?

2 Responses to "My Elimination Diet: Phase 1"