Aria turned three weeks on Monday (yes, nearly a week ago)– it is kind of amazing how time goes by so fast! On the one hand, days can be sort of long due to the fact much less of it is spent sleeping on my end; however, the fact she has been by my side for the last three weeks blows me away– I am obsessed with my sidekick! I cannot believe she is almost a month old already– it’s a bit sad she is becoming less and less of a peanut, but so exciting to see her grow, change and develop! 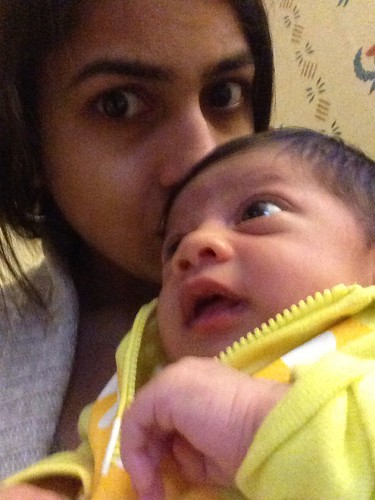 This past week, like the two before, were sort of a whirlwind. Everyday seems to mark a new development on Aria’s part, or a new realization on mine. Since I have no experience taking care of a newborn, every experience seems to be a novel one, and honestly, sometimes it is a bit nerve-wracking to know if you are doing things “right,” though I also am fully aware of the fact there is no such thing as right or wrong in taking care of a newborn (well, let me edit that to say there are many things that are clearly right or wrong, but there’s a lot of gray area too!). I am trying to take more of a “go with the flow” attitude, which is not my usual mentality due to my semi type A personality!

Week three also marks me trying to be more aware of any “patterns” that are developing with her. The first few weeks, I just tried to make it through without any breakdowns on either of our ends. While that is also the case this past week, my confidence as a mom has increased, enabling me to pay more attention to her more subtle cues and habits. The funny part is, just as I think I have a eureka moment and believe I notice a habit, pattern, or find a solution to some issue (usually involving sleep), Aria shows me that in fact, the behavior is more of a coincidence than anything else. I guess I should listen to the books that say that three week olds don’t have a schedule or any definite patterns! Still, I can’t help but to try to see if she is developing any sort of schedule or routine that can be built upon, though a lot of the time, the effort is pretty much futile!

Weight and height: Well, I did let you all know in a prior post that she had met and exceeded her birth weight by three ounces by her two week appointment, which was a huge relief and source of joy for me! Now, I can tell she is just getting bigger and growing, though I haven’t had a recent weight check. My guess is she has surpassed the seven pound mark pretty easily, and I will find out and update you all on her weight next week. As far as height and head circumference, both were also up as of her two week appointment!

Eating: We are still exclusively breastfeeding and it is going MUCH MUCH smoother than it was at the beginning of course. I get it and Aria gets it now! For the most part, it is fairly painless with the exception sometimes of the initial latch, and even the engorgement that happens when she sleeps more than three hours without feeding isn’t all too bad in the pain department. I have tried to see if she has any breastfeeding patterns but let’s just say it’s sort of hard to tell. We had one weird night (witnessed by my mother in law) where she was cluster feeding like a beast from about 5 to 9 PM, showing signs of hunger (meaning she was gnawing at her wrist) every twenty to thirty minutes! I was actually quite freaked out about it, until I did a little research and realized that was normal and often the sign of a growth spurt, though who knows! That level of voraciousness hasn’t surfaced since. She still eats every 1.5 to 3 hours, though sometimes it is more frequent especially during the day. At night, she is sleeping for longer stretches and thus probably only feeds three times between 7:30 P.M. and 7:30 A.M., which is a great development! I guess I can say that regardless, feeding is happening on-demand according to her cues, which can vary day to day.

Clothing: Still newborn size though she is definitely filling them out more! And still wearing a different outfit everyday! My whole family is in on an “outfit of the day” text message complete with pics which is pretty fun! If any friends want in, let me know (just kidding but not really!!)! Her latest looks: 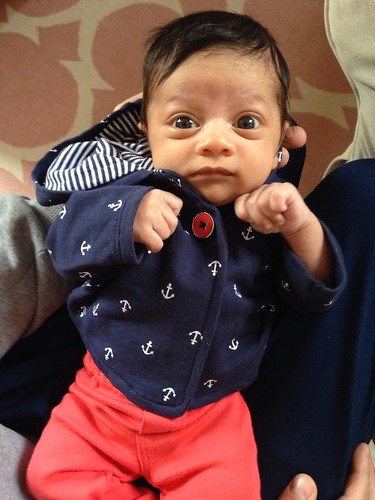 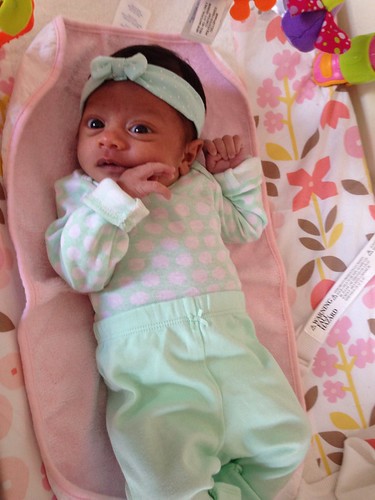 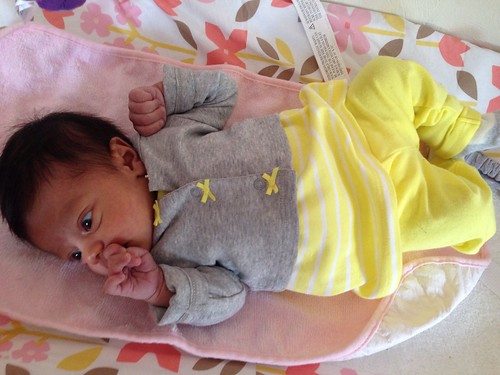 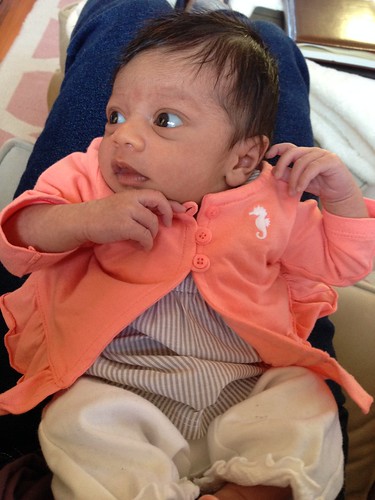 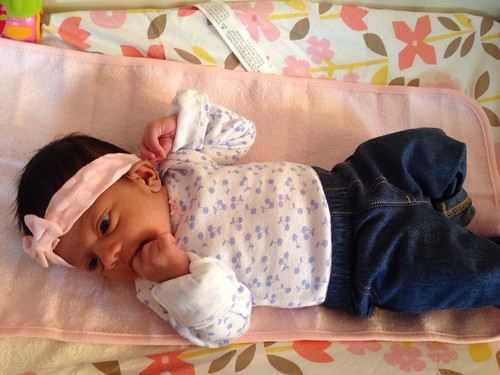 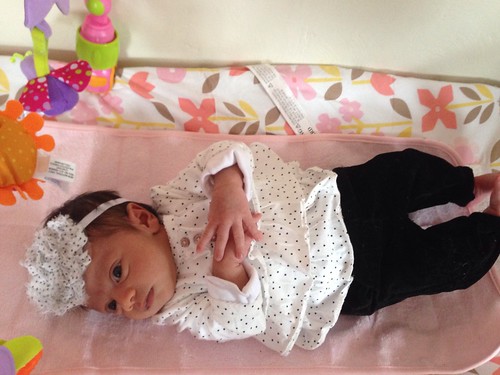 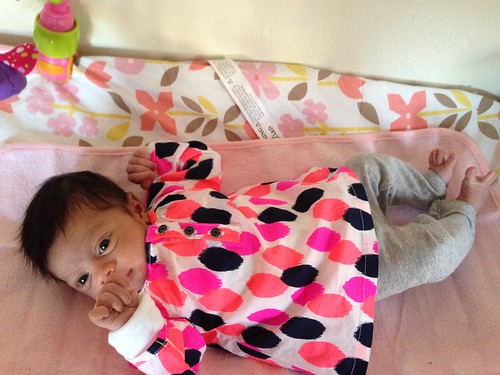 Social: The number of friend visitors has died down this week, so I really looked forward to the visits I did have! One great friend seriously came at the perfect time, after a few long days where my husband was basically missing in action due to a huge work-related obligation. She brought little Ari the cutest outfits, and mom the best bread in town, which was perfect timing due to the slim pickings in the fridge! Thank you Deshika!!! Family visits of course continued and were so welcomed– we had great visits from Gigi, Papa (my husband’s parents), my sis and nephew, and my mom. One thing I feel bad about is her lack of outdoor adventures during her third week. The weather here has been awful– cold, a little snowy, and extremely windy. I think we managed one walk outside where she had a meltdown (I saw after it was because of a poop-splosion mid-walk), and one trip to my mom’s house. This week I really want to take her out more and actually test out the breastfeeding thing in public. I think the mall might be the right place to start because I know the Nordstrom’s has a great “Ladies lounge” complete with a couch for breastfeeding (edited to add that we did it! Hubby and I took Ari to the mall and I did feed her in the Ladies Lounge– I’ll probably discuss this experience in a separate post!).

One failure on my part is my lack of participation in a new mom’s group I signed up for. The first week I couldn’t go because our newborn photo shoot took twice as long as I anticipated, and the second week I didn’t go because quite honestly I was exhausted! I find myself with so many questions that I want to ask new moms, so I am making it a priority to attend this coming Monday!

After our mall trip, I have come to the conclusion I need to take her out everyday–being stuck at home all day, everyday, is no fun and I just can’t be afraid to deal with the challenges that inevitably arise from taking a newborn out (crying, meltdowns, hunger, need to breastfeed in public, poop-splosions, etc. . . ).

Sleeping: Sleeping is definitely one of the things I most question myself about. Aria is a pretty good nighttime sleeper and for that I am very grateful! I tend to put her down anywhere between 7:30 and 9– I nurse her to sleep, swaddle her and put her in the Rock N Play and it tends to work. She wakes up about three times to eat (an hour long process including diaper change) and sleeps between 2.5 to 4 hours at a time. Daytime sleeping has me stumped though– she is super alert during the day and does get tired, but doesn’t like to sleep for more than a few minutes it seems! I have tried swaddling her, not swaddling her, putting her in the crib, bouncy seat, Boppy Lounger, swing and all work or don’t work at any given time! Sometimes she sleeps only a total of an hour or two a day, which means for a very cranky baby come evening (between 5 and 7). Usually though, when she barely sleeps during the day, nighttime sleep is better. I can’t wait for my next pediatrician appointment so I can ask about her daytime sleeping. 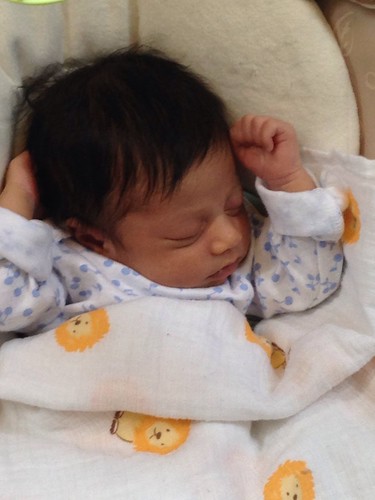 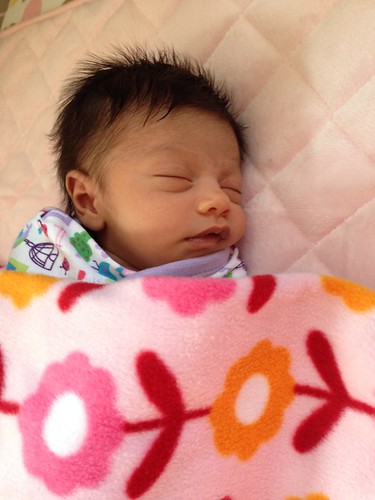 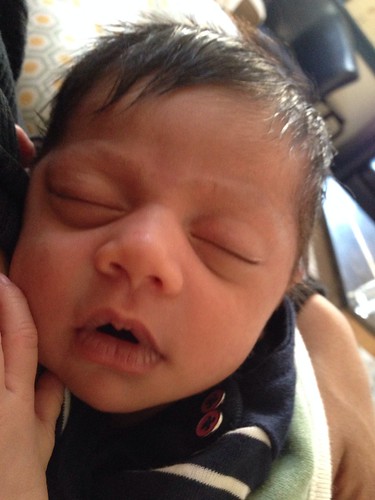 Likes: car rides, stroller rides, light (she’s always turning towards natural light or the light of the tv), being held, chest naps still, cuddling, the swing (fingers crossed it stays that way!), morning crib time (when she hangs out in her crib awake listening to lullabyes), all of her grandparents

Dislikes: sleeping during the day, lying on her back, did I say daytime sleeping? She also doesn’t like baths or when I change her clothes!

Other things. . . I have noticed she is a lot more drooley than she has been so far– a drool bib may be a fashion statement she makes in her near future! She also spit up for the first time– I know it is normal but it makes me so sad! She also had her first major poop-splosion that escaped the diaper onto her clothes– I was so proud I texted my husband! She is also a lot more vocal and gives more different kinds of cries– I am still trying to figure them out though!  Admittedly, some of her more guttural noises freak me out, but she seems just fine when she makes them!

By the time this publishes, she will be nearly four weeks old! A month already– like I said, I don’t know where the time has gone. Aria is one amazing girl who keeps me guessing– I think that is the fascinating thing about newborns– they change so much everyday! I look forward to seeing how she continues to surprise me with how awesome she is! And, at the risk of sounding sappy, just when I though she was the cutest thing ever, she just gets cuter by the day! I love you RiRi!!!