My time for blogging has definitely diminished of course, and every time I start a post it takes a week to finish! So, rather than come up with some sort of organized narrative, here’s a random list of all things Aria at a bit over five weeks!!! 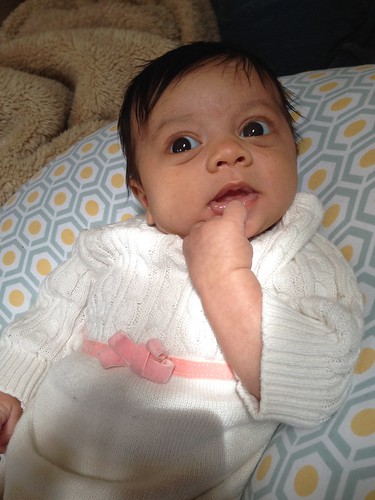 At her one month appointment, Miss Aria blew away all expectations as far as weight gain! She weighed in at 8lbs, 9 oz., which is over a pound a week gain since her two week appointment! I am so proud of her– clearly she is eating like a champ. I’m not going to lie, I felt really proud of myself too because since I am exclusively breastfeeding, it means also my body is doing what it should and providing her what she needs. 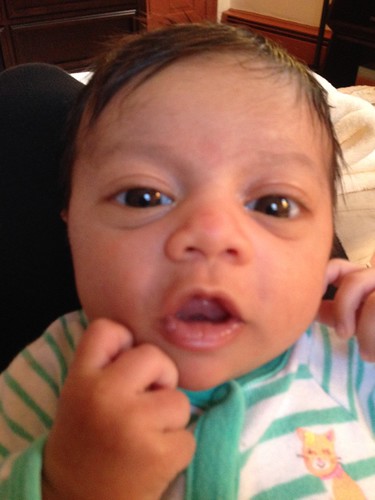 Also at her appointment, the verdict was she is perfectly healthy.

Aria has officially outgrown newborn diapers into size ones! The indication was she had four poop-splosions in four days that blasted out of her diapers and onto her clothes! One was on her Gigi, the next on her Papa, then on me, and then at the doctor’s! Thank goodness for a backup outfit that I had!

Aria really doesn’t seem like a newborn anymore. She is more of a real baby to me if that makes sense. She isn’t sleepy in the sense she is very alert and wide awake much of the day. She is filling out and has the most adorable chub. I have been wishing for chubby cheeks, a double chin, and roly-poly thighs and I finally got them!

She is also quite the drool monster. I am giving her one bottle a day of pumped milk and while she is drinking it, she does not always like the bottle. I hope for the day when she easily drinks out of a bottle without a struggle.  I forgive her though! 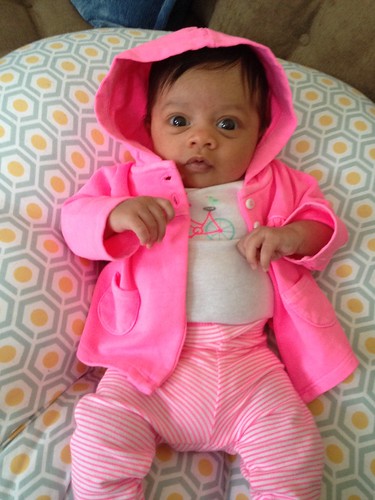 She has had two official five hour stretches of sleep! While many say “sleep begets sleep,” I have found on days she is awake more she sleeps earlier and better. Her “typical” sleep at nights these days goes something like this: I begin nursing around 7:30, and she falls asleep anywhere between and nine (on a not-so-good night!). Sometimes there are a few “false sleeps” where I put her down and her eyes pop open, which means more nursing until she sleeps again. After she sleeps, I eat dinner and immediately go to bed. Usually she has a four to five hour stretch before eating again. Then usually a three hour stretch and a two or so hour stretch with feeds in between. On her first five hour night, she only woke up once to eat before morning which was amazing! I know it isn’t really possible to get newborns on a routine, and while our days are pretty free-flowing, I do like the “7:30 start bedtime” schedule. Our mornings usually begin once and for all between 6 and 7 A.M. 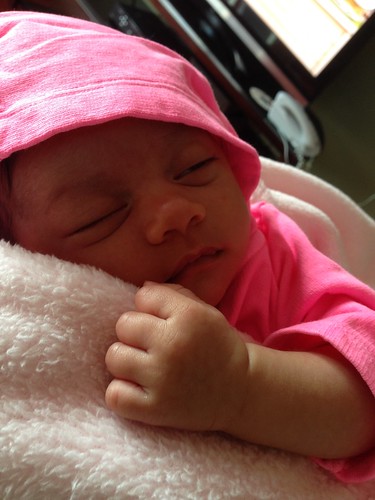 As far as my sleep, it is really hard to say how much I am getting. I go to bed an hour after she falls asleep and probably, with the wakeups and feedings, get four to five broken hours myself. I don’t sleep during the day– it is just too bright and sunny these days. I am taking care of her most days on my own (hubby’s work schedule is insane!) so it is really hard to nap when she does. She also doesn’t nap much during the day! 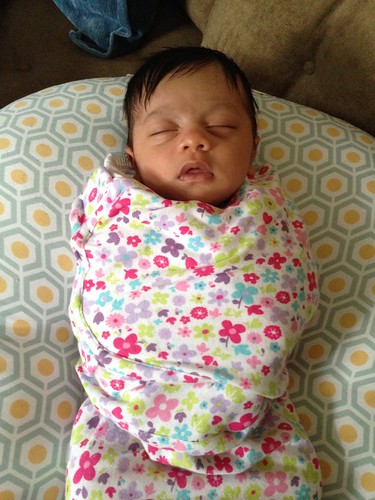 This past week also marks the first times she has fallen asleep with me not nursing. Usually, she can fall asleep in hubby’s or my mom’s arms but with me not so much. I think she associates me strongly with nursing, which is how she relaxes with me. However, she has fallen asleep in my arms not nursing a few times. Two were while walking around the house holding her and talking to her. One was in the Beco Gemini carrier when I was testing it out walking around the house. I am glad she can fall asleep with me while not nursing!

I am truly grateful for my mother. I go to her house on Monday and Wednesday and other than feeding Aria, she takes over all other responsibilities and literally holds, plays and sings to her the whole time while she encourages me to rest. She will be taking care of her primarily while I am at work and I am so thankful to have her and know Ari while be in great, soothing hands. 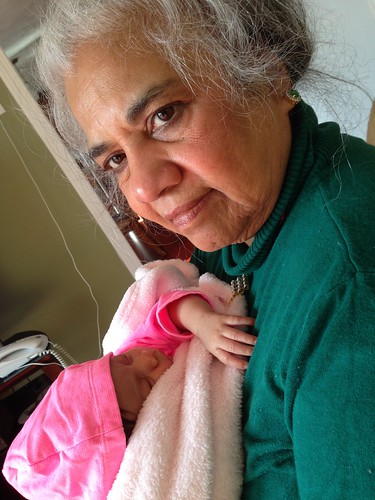 Aria loves her dad. Unfortunately she doesn’t see him much because he leaves before she is fully awake and comes home after we are both in bed four to five days a week but the time they do spend together is precious. She stares at him and adores him. And, she officially opens up her mouth to kiss him when he comes towards her saying “Kissy!”

My pedi said at 4-6 weeks, Aria will hit her peak crying and fussiness and crying should diminish after that. My goal everyday is to minimize her crying and respond to her needs before she gets too worked up. The one time of day though that she cries and fusses more is usually between 6:30 and 7:30. I think she is done for the day and tired. Admittedly, I don’t start the bedtime routine as soon as she is fussy because it is too early, and waiting till a little later seems to result in a better sleep schedule for all of us. I try to sooth her by singing, walking her around, and taking her for a car ride! I often sneak in an extra feeding at 6:30 with a bottle (though she usually eats around 5:30 too) and that can sometimes calm her until bedtime.

I put a toy on the handle of her carseat for the first time for a walk and she loved the distraction. The fact she noticed it and fixated on it means she really is becoming aware, tracking objects and such. 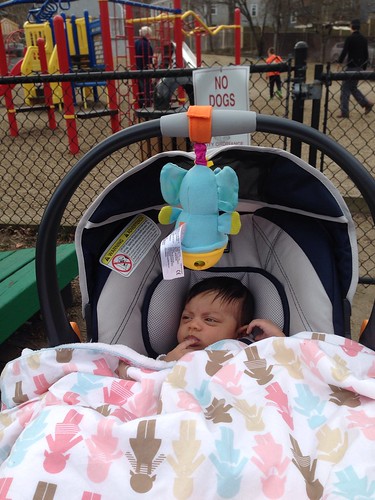 She loves mouth kisses still and when I say “kissy” and kiss her mouth, she opens it into an O shape and coos! And like I said earlier, she does it to her daddy too!

I still haven’t repeated an outfit on her yet. As for me, I throw on whatever is easiest for nursing and fastest! That means jeans, t-shirt I can pull down, cardigan, and Toms!

Now for some mommy updates. . .

Knock on wood, I have managed to take a shower every morning to start my day. I seem to anticipate when she will wake up or get fussy and use that 10 minutes to start my day with a super short, super hot shower. Also, Aria has been great about spending time in her crib, staring at herself in the crib mirror and stretching out after a night of being swaddled so I can drink a large (half caf) coffee from Dunkin Donuts and eat a leisurely breakfast of banana, cottage cheese, and half of some pastry from Whole Foods (my fav are vegan date nut scones, pumpkin, corn and zucchini muffins). She listens to the Christina Perri Pandora station and loves it as much as I do!

I have been eating carbs, carbs, carbs and barely any veggies. Bad I know but the thought of eating fibrous or watery foods right now doesn’t appeal to me since I don’t want to feel gassy or get a stomachache. If you remember from when I used to actually post about my food and health, I have inflammation issues in my digestive tract. I am not saying fruit and veggies irritate those issues but carbs just seem easier on me considering and I don’t want to risk not feeling good stomach-wise. So lunch usually consists of a huge bagel with cream cheese, snacks include Clif and Larabars, and dinner is still whatever takeout we have. This week Ari and I went to a bakery and got some broccoli pies (there’s some veggies in there I guess) and pizza. I also have been eating leftover takeout Indian food this past week.

I eat a monster, epic dessert every night right before bed. It is something I used to only do once or twice a week, but now it is a nightly occurrence– kind of a reward for a long, sleep-deprived day! We took Riri to an outlet mall last weekend and I bought nothing except chocolate covered Oreos and graham crackers and chocolate bark. This week, my dessert of choice is the following: pound cake from Whole Foods with ice cream, a chocolate covered cookie, hunks of chocolate bark and finally two chocolate Godiva truffles. All in one sitting. And yes, breastfeeding does burn a lot of calories because I am still just a pound or two above my pre-pregnancy weight, and honestly, that weight is all in my boobs!

I do feel guilty that I am not eating the best for Riri; I am trying to slowly get back into veggies (I did have a veggie soup on day for lunch). One way I am doing this is by eating dehydrated veggie chips which satisfy the carb craving without the wateriness of veggies that make me feel too full. Fortunately, from what I have read, my milk still is nutritiously perfect for Riri despite my lackluster diet. I think once the whirlwind of newborn life settle down and I can focus just a tad bit more on myself, I will make a more concerted effort to clean up my act diet-wise.

It is so freeing though how much diet and exercise do not preoccupy me. I feel so mentally free not obsessing over food and fitness! Now don’t get me wrong, I am trying to go on walks with Riri when the weather is nice, but I don’t care if I don’t get in some activity every day. Life is about keeping her happy and healthy and spending time with her, and while exercise does fit into that by way of stroller walks, finding solo time to go the gym is just not a priority (or reality) right now. I do have fun taking her around down, showing her the sights! 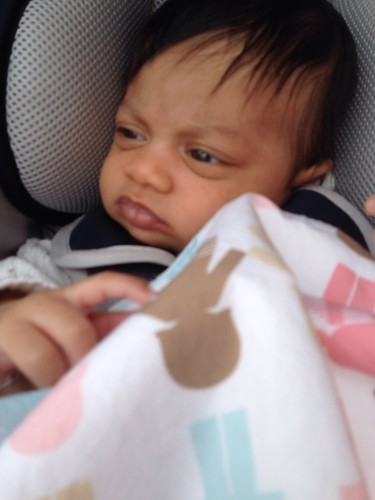 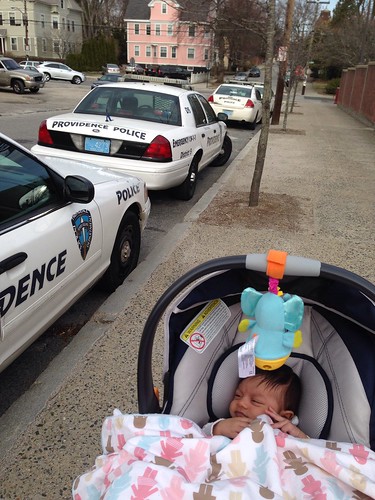 All in all, I love this little girl to death! I love the fact that what I have to look forward to is more and more interaction and watching her do new things everyday! Plus, heading into spring and summer is the perfect time to really enjoy her since we won’t have to be stuck indoors all day. In just a few days she will be six weeks, which to me is really a huge milestone for some reason. I think that’s about the time that some sort of routine can be instituted with some success. I look forward to having a bedtime routine that includes books and baths (right now, I read to her whenever she has the patience, and baths are in the morning!).

Well that’s all for now– be back soon!

2 Responses to "Baby Aria: A Quickie Update at Over Five Weeks!"