Hi friends! I know– it has been way, way too long! I totally dropped the ball on Aria’s monthly updates but I want to get back into recapping her life as well as mine! Rather than try to backtrack to past months, I figure the easiest way for me to jump back in is to recap Aria’s fourth month now that she has officially turned four months old! I cannot believe my “little peanut” is not so little anymore! Goodbye newborn and hello infancy! 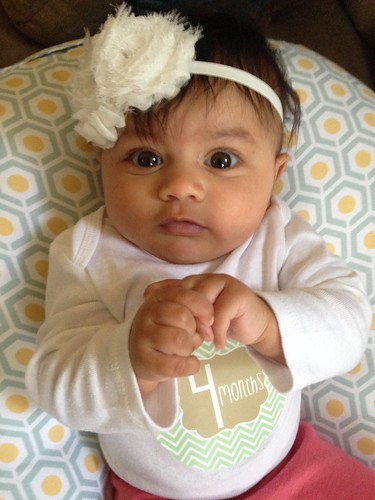 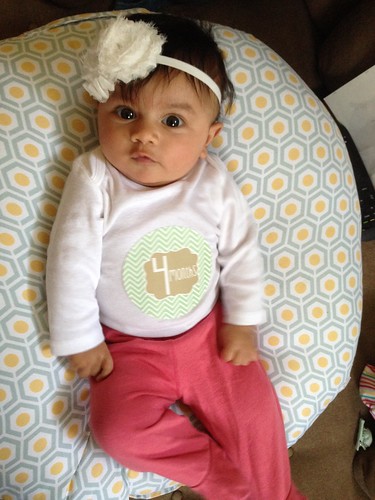 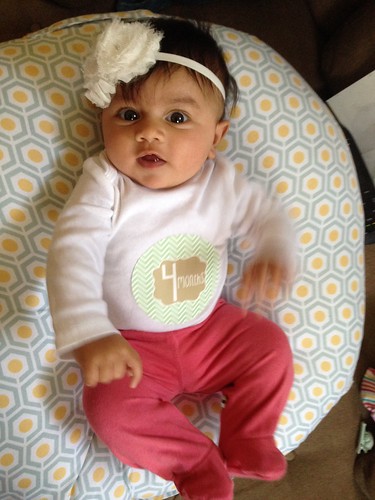 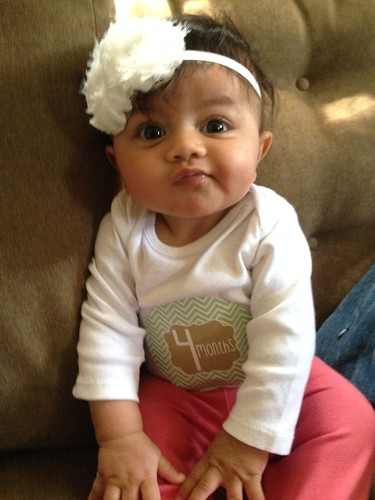 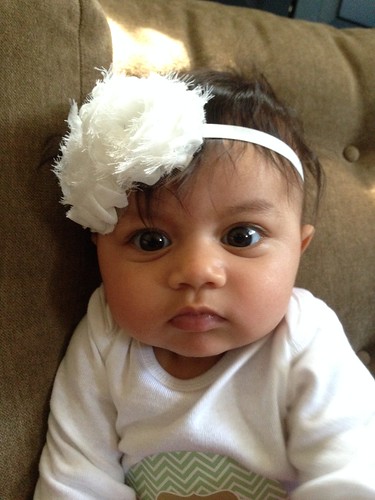 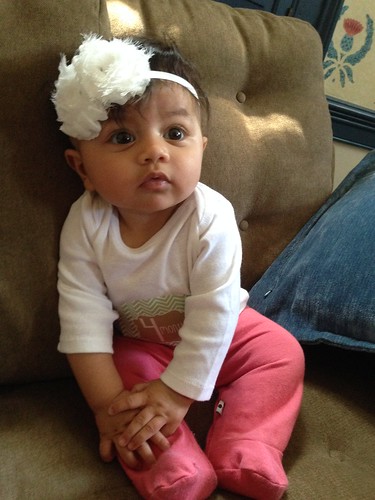 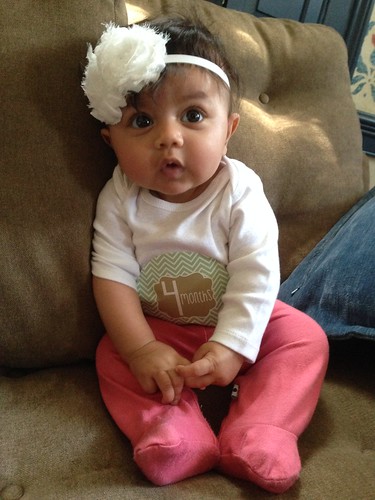 Weight and height: I don’t have her four month appointment for a few more weeks but I took her in for an unplanned pedi appointment (my first “emergency” appointment, which at four months I think is pretty good!) a week and a half ago and she weighed 13.5 lbs which means she has already doubled her birth weight and has gained 2.5 lbs in one and a half months! I think she is still on the smaller end of the spectrum but she isn’t tiny by any means! In fact, I think she is pretty average in terms of weight!  Oh and the emergency turned out to be absolutely nothing except a little baby eczema. 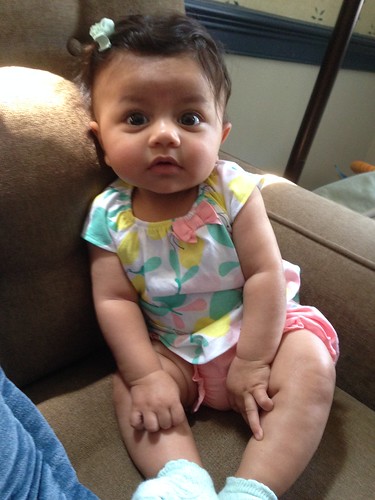 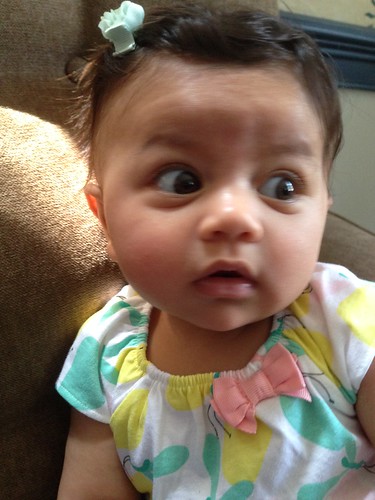 Eating: Aria is still exclusively breastfed– this is an accomplishment that I am so very proud of! As I have documented, breastfeeding was really tough in the beginning but in terms of ease now, things have gotten exponentially better! She is so much more of an efficient feeder– feeding sessions now are typically under 10 minutes, sometimes as little as 5, and occur about every three hours during the day. For me personally, it seems much easier to breastfeed, which requires no equipment, than to deal with bottles although I do wish my little one took a bottle easily! That’s right– Aria still hates the bottle! She will take a few ounces occasionally but generally fusses/cries/refuses it! I go back to work in two months so let’s just say I hope she figures it out by then! If I didn’t have to return to work I wouldn’t really care and would just wait it out till she can drink out of a cup, but since I do go back in late August, it does stress me out. I plan on doing some sort of “bottle boot camp” in a few weeks where for a day or two all she gets is bottles while I pump to keep my supply up. I don’t want to do it but I am afraid I will have to! One thing that is interesting is that now she is way more aware of her surroundings, she is a distracted feeder! It isn’t uncommon for her to unlatch mid-feed to turn her head at something she hears or sees, which means I have to keep all feeding sessions quiet and without dad in the room! 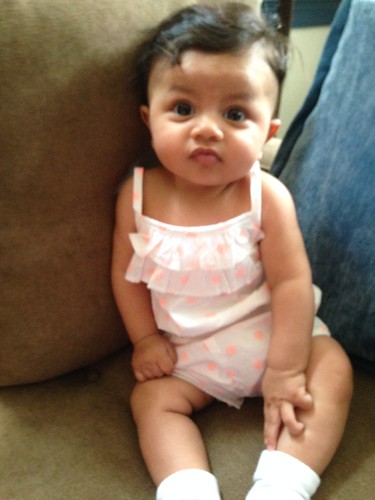 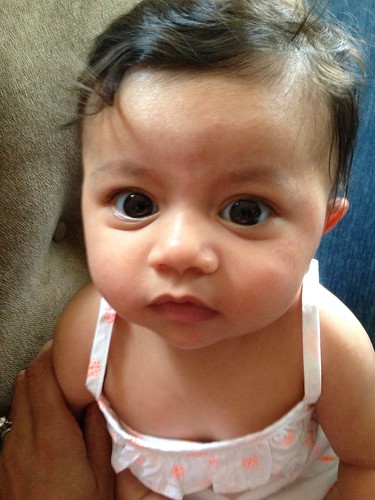 Sleeping (naps): One thing I am kind of obsessed with is making sure she naps during the day, and is sort of on a loose schedule. Aria typically takes two “good” naps ranging from 45 minutes to 2.5 hours during the day, but the goal is always to have three decent naps. The problem is that we are often out when her third nap should happen, so we are lucky if her third nap is a car catnap. She takes all naps at home in her crib, still swaddled with white noise. She does put herself to sleep though without a pacifier, which I have never offered her.  I swaddle her and just place her in her crib, keeping the room dark with ocean sounds playing. She usually does fuss and protest for a few minutes and I let her be until she falls asleep (usually in under 10 minutes). If she cries, I try to soothe her without picking her up by patting her, but if that doesn’t work I pick her up until she calms down and put her back in the crib, repeating until she falls asleep. My goal with naps is not to have to rock her/nurse her or do anything particularly special for her to fall asleep. I admit I am a slave to her morning and early afternoon nap because I want her to sleep, but I am looser about the third nap so we can have some sort of life outside of the house! 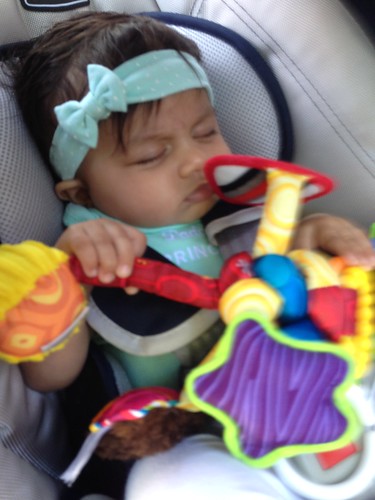 The only time she fell asleep on me this past month! 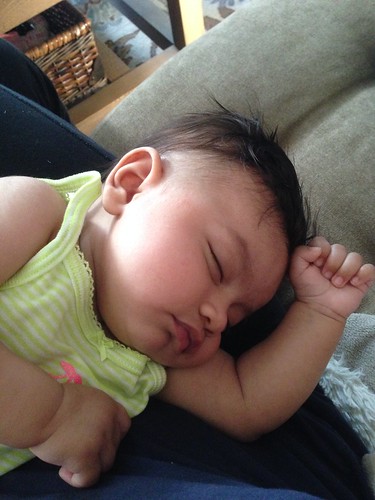 Sleeping (night): Aria had been sleeping in her rock n’ play until about a week ago, where I transitioned her to her crib because she looked a little big for the rock n’ play. The transition went much better than expected and now, I am sure she has long forgotten about the rock n’ play. Aria had a good streak during her second and third month of sleeping through the night but unfortunately it seems she had hit the dreaded four month sleep regression. Now, she currently wakes once or twice (rarely three times but it has happened!) a night which is pretty tiring but not as bad as how I read it can be. She usually is asleep by 8 but starting now I am going to work towards a 7 PM bedtime over the course of a week or so and wakes around 12 for a feeding. Then she sometimes wakes around 3:30 for another feeding. She is up for the day by 8 the latest but usually in the 7 o’clock hour. I am fortunate she usually falls asleep immediately after her feedings, but the fact that she is waking when she didn’t used to does stink! But according to everything I have read, this four month regression is common and occurs because of how much their brain is developing right now. Hopefully it ends soon and she is back to one or no wakeups in a few weeks. I do think her distractibility during feeds during the day makes her feed more overnight because she doesn’t quite get the calories she needs during the day. I am not sure how to remedy that since I can’t force her to eat or measure how much she gets during the day but hopefully it just works itself out. I have read an earlier bedtime helps, hence the goal of having her asleep by 7, especially since her last afternoon nap sometimes doesn’t happen. She is still swaddled (arms only not legs) because she still flails her arms when on her back but I hope to break that habit within the next month. I also nurse her to sleep at bedtime only which is also a habit I plan to break soon (though I don’t think there is anything necessarily wrong with that since she does sleep independently for naps!). 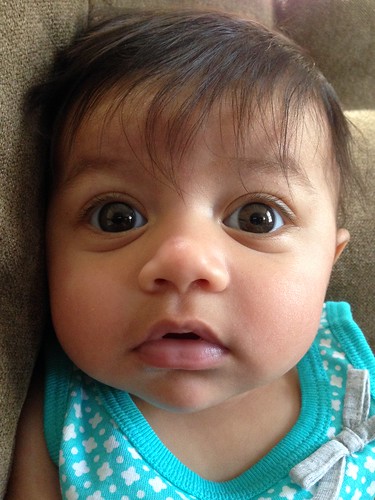 Clothing: Aria is in size 3-6 months clothing. It was so sad putting all of her newborn stuff away, but at the same time, I am so happy she is growing right on track! 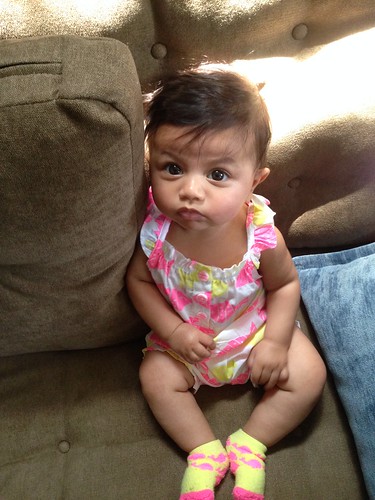 Social: Aria admittedly makes you work hard to get a smile or laugh out of her, but generally she has a great temperament. She is a serious little baby– so alert, aware, and inquisitive! As my husband says, she loves “being part of the team,” and by that we mean she is happiest when she is a part of things! Like for example, she’d rather sit on my lap while I am in a conversation and just observe than be kicking by herself on a play mat. She enjoys going on walks where she can just look at everything around her and she rarely cries when in a store or other busy place where there are plenty of crowds and things to see. In fact, I think she is fussiest when it is just me and her all day, which is why I make it a point to get out of the house every day! She does love our new mom’s group where moms and babies hang out together– she has made quite a few adorable baby friends! 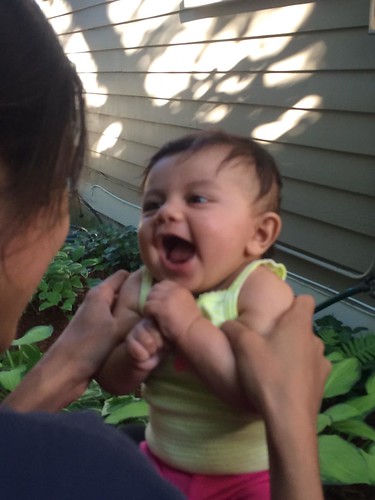 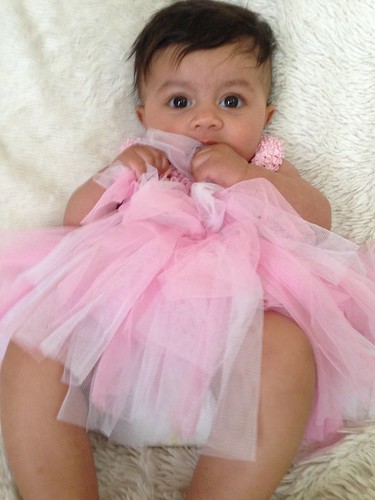 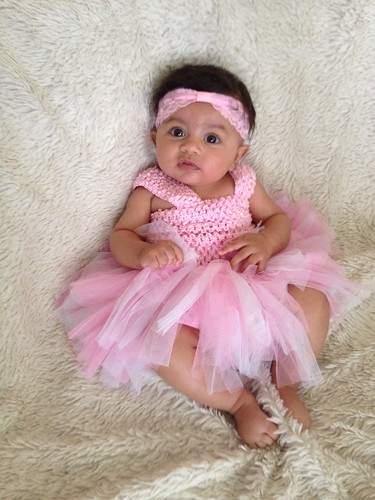 New this month: Aria is so grabby! She grabs toys on purpose, grabs my hair, my fingers, and even my nose on occasion! She can hold objects easily and has fantastic focus. She follows conversations, responds to both my and my husband’s voice, and follows people as they move about a room. She is working hard on sitting up and can sit up unassisted for a few minutes at a time. She also is obsessed with her feet and works hard to grab them. Her head control and strength is fantastic also. She is making a ton of new sounds too and is really finding her voice. Aria can’t quite roll over easily yet (she has done tummy to back rolls a few times but mostly because she hates to be on her tummy) but she is starting to experiment with hanging out on her side and going from side to back and tummy.

Likes: Mom! and Dad! the outdoors, our backyard, going on walks, being held on walks, baths at night, books and being read to, sitting up, her Sit Me Up, toys she can grab like the Oball and Sophie the giraffe, tv (I know I know not good but it’s on sometimes and she loves it!), paper towels (she can shred them in minutes!), being swaddled, just being part of the action! 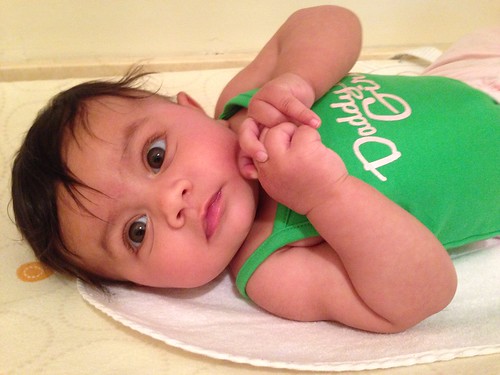 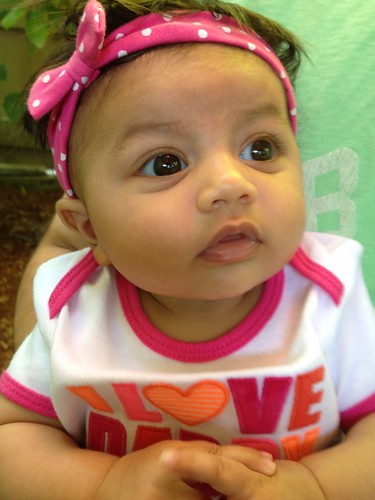 Dislikes: Tummy time with a passion, being left on her back for too long like on her playmat, going to sleep in general in that she never happily drifts off to sleep except when nursing at night, not being part of the action! 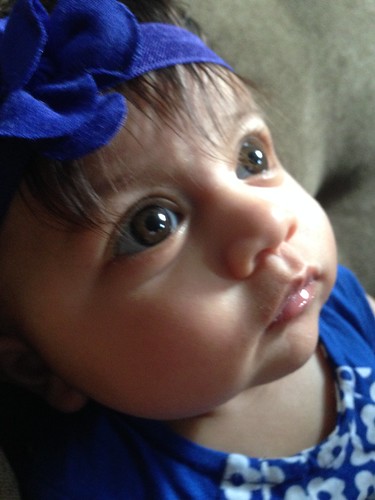 Momma: Overall, I am happy and healthy! Sure I am tired and forget me sleeping when she does, but it’s not overwhelming exhaustion or anything. And sure I get stressed out occasionally that I am not doing something “right,” but my husband is very good about bringing me back to reality that there is no one right way to do things. Other than being tired I cannot complain at all about my physical health– I am back to my pre-pregnancy weight, my joint issues are pretty non-existent right now (thank you breastfeeding and postpartum hormones!), and so much more physically capable than I have been in nearly two years! Mentally I am also doing well– Aria and I are best buds and if she is happy, I am too! It is beyond exciting/rewarding/thrilling to be with her 24/7 everyday and be her momma! And since this was originally a health/food/fitness blog, I will add that I am still vegetarian but basically will eat anything within those parameters and eat a lot! I don’t cook right now– we eat all sorts of takeout or my mom cooks for me! Plus dessert every night! One thing that being a mom has done is totally free me of my semi-restrictive ways when it comes to eating. I honestly don’t stress that I have eaten too much– I stress if I have eaten too little! Gotta keep the milk supply up!

I promise to be back with more frequent posting– I miss you all!